Record of the European Debating Championship, Part 3: Then All of a Sudden, It Was Over

As I sit down to write this report of Tallinn EUDC 2017, the only thing I can think about is how incredibly fast everything went. I am already back in the Netherlands for 1.5 weeks, but it feels like it was yesterday that I was debating in a university in Estonia.

It is hard to find a place to start describing the week of the tournament. Above everything, EUDC was amazing and incredibly intense. It was exhausting and one of the best weeks of my life. I arrived a day earlier than needed in Estonia so I could have a bit of quiet time before hundreds of debaters would arrive, but there were already some people there. Most of the participants arrived on the 14th of August, arrivals day. Each group that arrived brought new nerves into the lobby of the hotel, but more importantly, they came with happy faces and a lot of hugs for all the people the know. It showed the mentality of the debating community, even though everyone was nervous and focused, they still had time to socialize and engage in all kind of conversations and, of course, discussions. 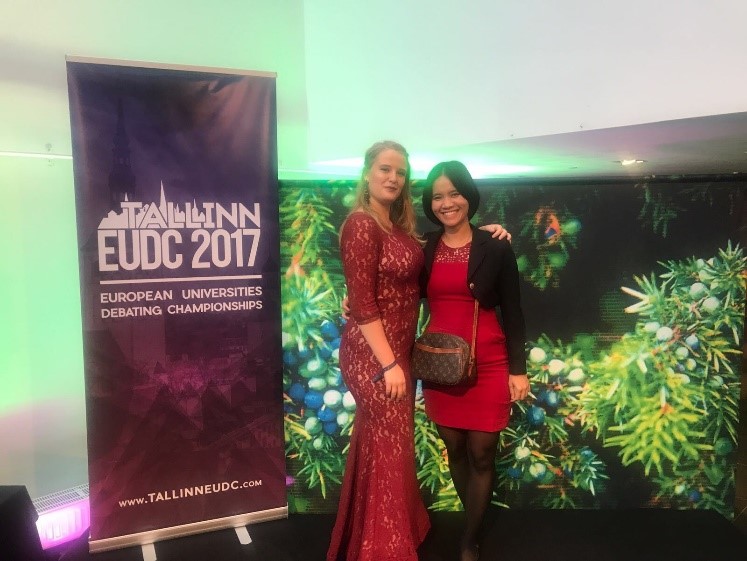 When everyone had arrived, it was time to start the debates. We started with a round about the motion: “This House believes that the US should ban extremist groups”. It was a fun debate, especially since there were two really good teams in our room. That did mean that we got our ass kicked, but it was great to watch and see how they do it. After a good first round, where we took a third, Huyen and I experienced the lack of preparation we had due to the last minute changes in teams. After day one we ended on two points after three round, but we were determined to do better in the next two days. Scoring five points on day two and another six points on day three, we ended on 13 points after nine rounds of debating.

However, we did not yet know our score when we went to break night, probably the biggest party of the tournament. When we arrived at the venue for the social, everyone was nervous about the announcements for the teams and judges who would make the break and proceed to the out rounds. A couple of Dutch judges broke, and so did some teams. Leiden A and B were to represent the Netherlands in the open break, both these teams also broke in the ESL (English as Second Language) category and were joined in that break by Leiden C. A great achievement for everyone involved!

For the rest of the debaters, however, the tournament was over. Upfront I had planned to go to Helsinki the next day since it was only 2 hours away with the ferry, but I was very glad that I decided not to go and instead watch the debates from the Leiden team. In the first out round, the open double partial quarters, both Leiden teams faced each other. Even though that was unfortunate for them, it was great for the Dutch supporters who could now cheer on both the teams at the same time. So we did… and we were loud, the recordings of the round can prove that.

Of course, the tournament was more than just the debates. It was mainly a lot of fun with a lot of great people. In between rounds, during meals and at the end of the day in the swimming pool and sauna. The whole ambience was amazing and the great results were the cherry on top of the cake. In the end, Leiden B made the ESL final and, although they did not win, they did great. The top 5 of ESL speakers contained four Dutch speakers with Floris as best ESL speaker in Europe.

This was my last report on the European Universities Debating Championships. Hopefully, next year is going to be even better and more people from Kalliope will join, but for now, I hope to see you all this Monday at 20.00 at the Usva.

Record of the European Debating Championship, Part 2: Up, up and away

Time is flying and I will be flying soon as well. I am writing this post somewhere in the night from 12 – 13 August. It really is time to go to bed, but nerves Lees verder…

The Real Problem with ‘Political Correctness’

Three weeks ago, it was announced that the thirteenth incarnation (or, to use the official term, ‘regeneration’) of the Doctor – the protagonist of the legendary BBC science fiction show Doctor Who – will be Lees verder…